Some death certificates found in the civil status register of the village of Ouegoa and of the whole Diahot district between 1870 and 1880, concern people native from the county of Cornwall in England. Most of them worked as miners. How could they have gotten there ?

Someone write to us from Sunnyvale, CA

We had the beginning of an answer a few years ago. Indeed, a certain Patrick Hart, living in California, wrote to us that, thanks to our civil status records, he had finally found the traces of his great-great-grand-father whose persistent family legend said he had disappeared in Australia “leaving his shoes on the sand …”.

Actually, John Hart had left his village of Redruth in Cornwall around 1870, leaving his wife and 2 children to seek gold in the United States. Then, he had effectively continued his journey to Australia from where his family had lost his track…until one of his descendants discovered a few decades later that he had died somewhere in the valley of the Diahot in the north of New Caledonia…

The Cornishmen in Diahot valley

A Celtic culture region, Cornwall is located at the western end of Great Britain. The exploitation of cassiterite (a mineral species composed mainly of tin dioxide) is said to have started there as early as the Bronze Age. After tin, the extraction of silver in the Middle Ages, replaced by that of copper from the 18th century, continued until the closure of the last mine in the region at South Croft at the end of the 20th century. Thus, its inhabitants (Cornish or Cornishmen) have developed for several centuries an unequaled know-how in mining.

In the middle of the 19th century, with in particular, the decline of copper mines in Cornwall, the “Cornishmen”, with their ancestral expertise, gathered to try their luck on the new prospecting and extraction fields that were emerging across the world.

Thus, from 1845, many of them landed in South Australia following the discovery of copper deposits on the Yorke Peninsula northwest of Adelaide. The Cornish immigration in this region was such that the peninsula was quickly nicknamed the “Copper triangle” with the three mines of Moonta, Kadina and Wallaroo ”or“ Little Cornouaille ”, the community of miners of this region being the most important in 1875 . 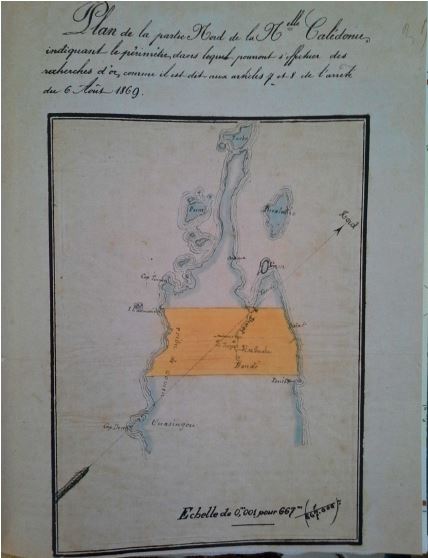 In the 19th century, in addition to copper, gold was also and especially looked for. It was found in the Ballarat region northwest of Melbourne in 1851, but also in New Caledonia. And it was in 1870 that the official announcement of the discovery of a deposit near the Diahot at a place called “Moindine” (Manghine) began to interest Australian investors. But in the absence of gold, it was mainly copper deposits that were found, first at Manghine on the “Eureka” mine at the beginning of 1872, but especially in the bed of the Ouegoa river, future site of the “La Balade” mine.

In 1874 John Higginson founded “La compagnie de Balade” with, among others, William Morgan, a miner investor and founder of the Bank of Adelaide. And it was at the instigation of the latter that the Cornishmen of Australia landed in New Caledonia, as can be seen from the Australian press articles of the time. Thus, the Adelaide Observer of July 14, 1877 mentions that William Morgan had sent 30 miners to the Balade mine. That same mine, headed by Captain John Warren, employed at the time about 80 Cornish miners, 100 French and 110 Pacific Islanders.

But, the employment of former French convicts, cheaper labor, from March 1878, caused the departure of the Cornishmen to more lucrative regions like the tin mines of Tasmania, leaving finally very few of their footprints on New Caledonia.

We know nothing of John Hart’s life in New Caledonia. He was clearly not on the staff of the Balade mine before his death. Indeed, his name does not appear in the various staff records carried out by Benoit Delvinquier in his excellent article “Les Cornishmen du Diahot” published in 2017 in the review n° 193 of the local historic society. But still according to this article, there were still 26 English present at the Fern-Hill mine located less than a kilometer north of the Eureka mine.

What is certain is that John Hart rests somewhere in the Diahot area. Several years after he vanished, his sons John and Richard left Cornwall in their turn and follow in their father’s footsteps. They went to the USA where they settled. John’s way stopped in 1901 in Eureka, CA…

As for Richard, Patrick’s great great father, he worked as a “typesetter” for the San Francisco Chronicle. He also married the daughter of a British Colonel named Henry Faircloth (81st foot), whose family have been migrated to San Francisco in the 1880s. Curiously enough, the Faircloth family were native from Australia/New Zealand…

A few Internet links to go beyond